My favorite Christmas movie as a kid was How the Grinch Stole Christmas... not much as changed as it is still my favorite as an adult. 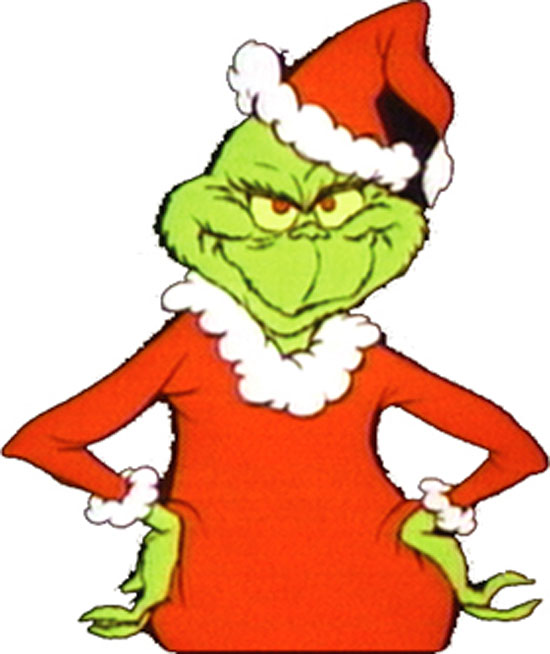 I loved Cindy Lou Who. She was so cute, sweet and innocent, believing in what someone she thought she could trust told her. Maybe that is why I like her? This year when it came time to create a piece or two for the Chuck Jones Center for Creativity's Red Dot Auction... (you can see what I created last year here)... I decided to re-create The Grinch and Cindy Lou Who in my style of torn paper collage. 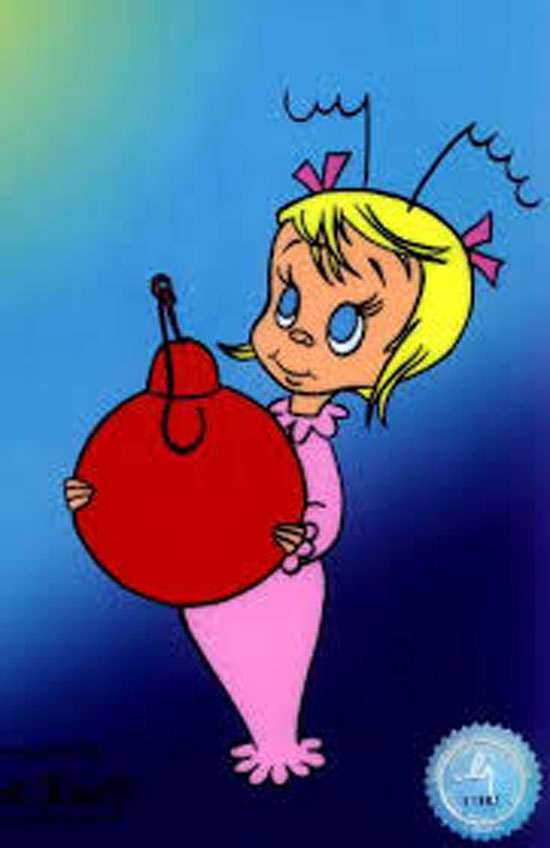 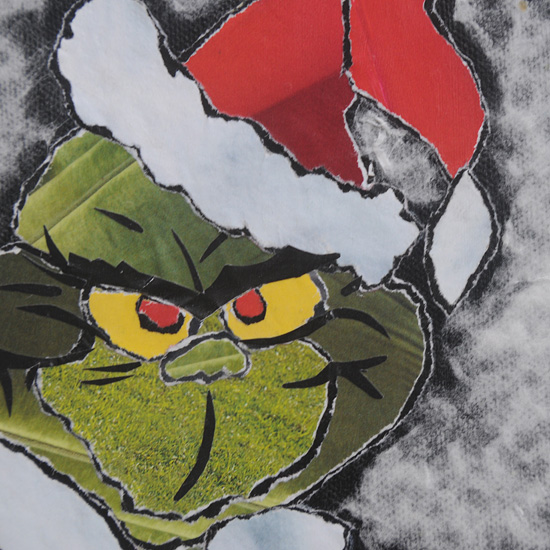 All of the papers are from magazines, with the exception of the background of The Grinch. 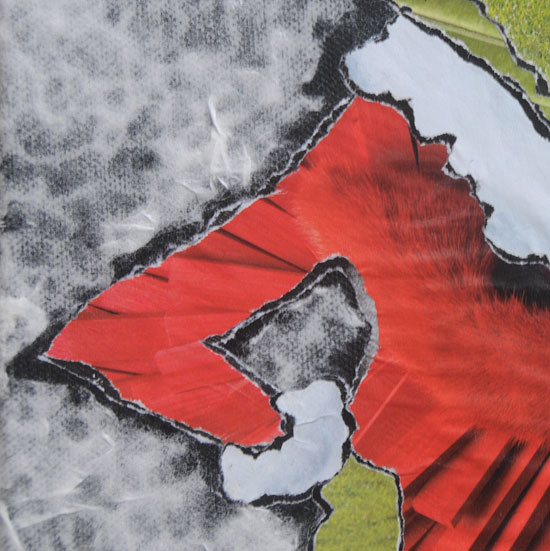 Originally I was going to use the black of the canvas to create the heavy black lines of the original cartoons, but it was not looking like what I had envisioned in my head. 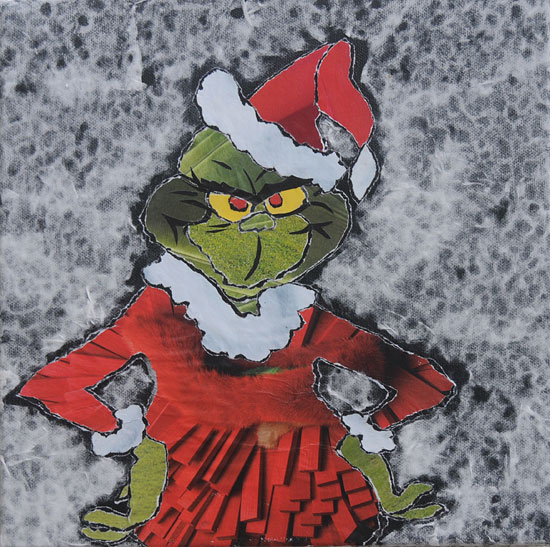 I went back to the magazines and pulled out black pages and tore a second outline layer. That is the look I wanted.
Cindy Lou was next: 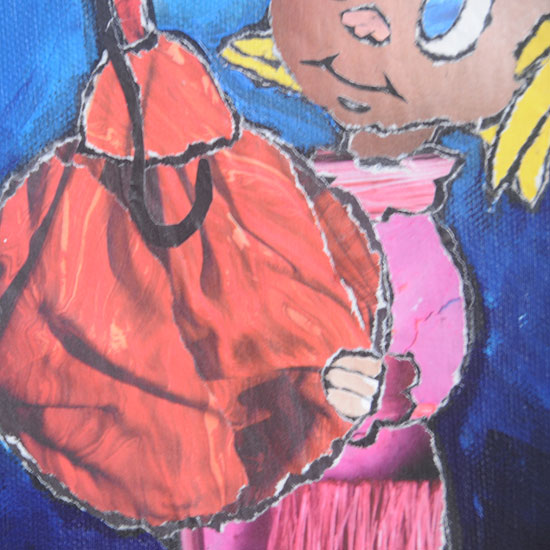 I cut her antennae and the hook on the ornament as the tearing was too complicated for these few thin pieces. I chose to paint her background to resemble the original sketch. The Center had a great turnout of artists this year and the work was remarkable. It was a great night, two in fact as Friday evening was an artist preview and Saturday was the actual event. This year when the winning bids were announced the artists were introduced as the work is signed on the back to keep the attention on the work itself and to create some excitement. My hope was that the same person would bid on both pieces. Guess what? That is exactly what happened! Here I am with the winning bidder. 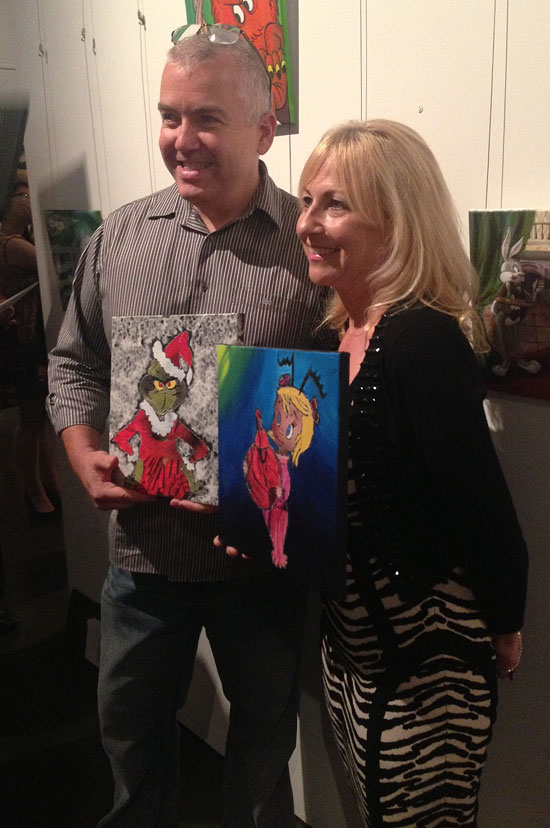 My Grinch and Cindy Lou Who are now living in Vegas!

Nina was my date for the night, we had fun being in such a creative and fun environment together.

I am already thinking about ideas for Red Dot 4!

I was introduced to the Chuck Jones Center for Creativity by a chance meeting on the beach that I wrote about here... I have another story of synchronicity and the Center that I will share in a future post. It is a crazy small world.
at 12:00 AM
Email ThisBlogThis!Share to TwitterShare to FacebookShare to Pinterest
Labels: artwork, Chuck Jones, Chuck Jones Red Dot Auction, Cindy Lou Who, creativity, drawn to color, magazines, Mary Beth Volpini, The Grinch, Throwback Thursdays, torn paper collage