In March, I wrote about the elusive Bobcat that I had heard about but had not yet seen. 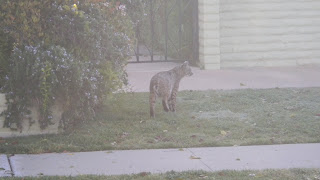 In June there was an article in the local paper that her name was “Babe” and she had 3 cubs. There were photos published of her and her cubs hanging out in people’s backyards.
In June we also had a visit from a bobcat… my husband and daughter had just come home and I was out front. They got out of the car and as I looked at them I saw a bobcat come out of the bushes on the side of our house. As I was pointing and trying to tell my husband to turn around that a bobcat was literally 5’ in front of him, he was looking at me like I was crazy and had that ”what is she yelling at me about now” look on his face that husband’s have….He turned around and held out his hand… the bobcat turned around and went back into the bushes. I ran into the house and grabbed my camera and went out back. My son and I were standing literally 5’ from her… as I thought “this is probably not a smart idea” so we went inside… 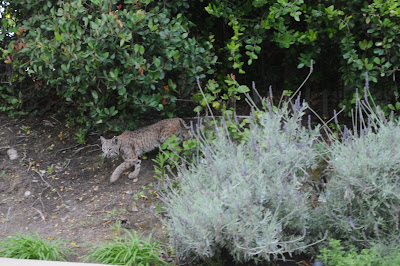 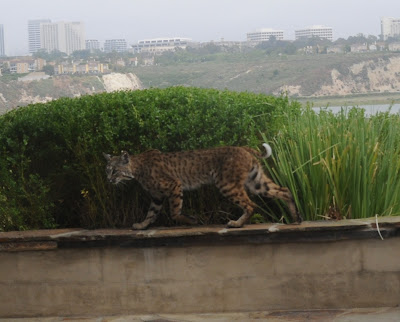 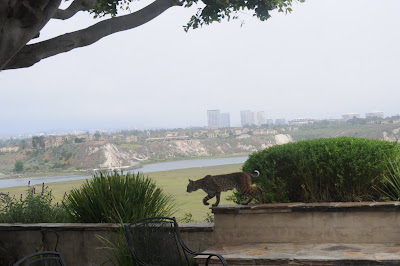 I had known that Babe had her cubs and this cat was by itself so I thought it was another one that liked our neighborhood. We would see it out front… in the road with a mouse… on our front porch etc.

I really wanted to see Babe and her cubs in our backyard, but I had read a recent article that she was back in the back bay at large and had left the neighborhood. One day last week I was on the phone with a friend… I happened to look into my backyard and I almost fell over. There sat 4 Bobcats. IN.MY.BACKYARD…. I told my friend I had to go… grabbed my camera…called my son to come into the kitchen and started snapping. As my son walked into the kitchen they looked up and started to scatter… Mario…the great watch dog that he is went crazy barking…. but I got some great shots… 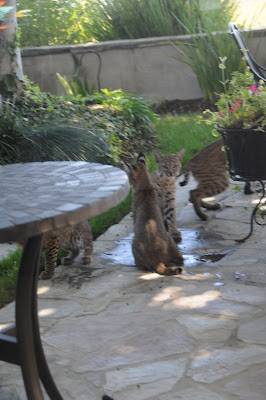 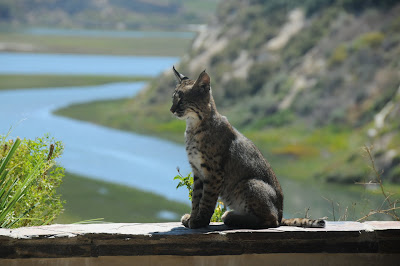 When one of the articles was published about Babe, a man named Dick Newell of OC Trackers was mentioned. I had visited his website and there was a spot to report Bobcat sightings. I had not done this on the previous occasions but this time I thought I would report my findings. I was thinking that this was a different set of cats because all of them were about the same size. I sent in my report and that night Dick emailed me and asked if I would share a few photos. Went I sent a few to him he confirmed that it was in fact Babe and her cubs…Babe is only about 17 to 19 pounds and the cubs were catching up to Mom. 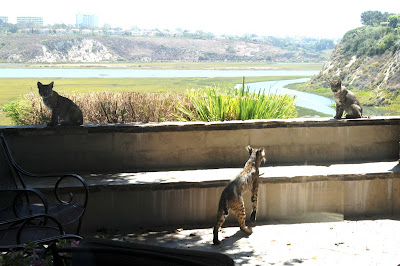 I offered all of my photos to Dick and he came by one day to pick them up. He has been tracking Bobcats in the OC for many years, he is so knowledgeable and interesting. I showed him all of my photos and the first one in March was just a few days before she gave birth. The one in June was also Babe. When I told him I thought it was another because she was by herself he gave me a little Bobcat lesson. “Babe will hide her cubs and go out in search of food.” I was surprised to see that she would leave her cubs. He told me that when she hides them they will NOT come out no matter what…. I wish my kids would listen like that!!!
I gave my photos to Dick and his team to study… they will study each photo and the markings on each cub. 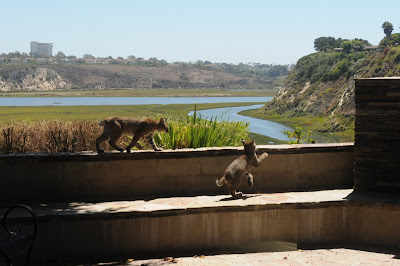 I hope that Babe will stay safe and no one will try to hurt her and her cubs…
at 12:58 PM
Email ThisBlogThis!Share to TwitterShare to FacebookShare to Pinterest
Labels: Babe, Bobcat