Yesterday was exciting for us Southern Californians…
First… Easter Sunday…we ended up sitting outside for mass as our church owns two churches right now and both were full. We were outside to celebrate this glorious day…

Followed by brunch and 5 tables full of food to choose from… delicious. 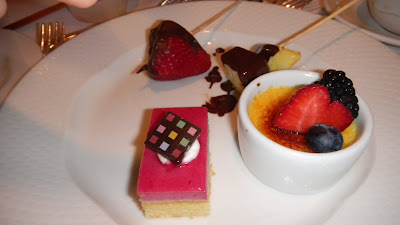 We were hanging out at home… L and I were in our bedroom and then N came in to show us her school project that she had been working on. I heard a little rattle and I thought the cat was making some noise in my closet… just as I looked into my closet to see what he was doing…. No cat in sight L and I looked at each other… “it’s an earthquake….”

D ran into our room and got under the bed… Mario started to go a little crazy. Usually by the time you figure out it is an earthquake it is over. NOT THIS TIME. You could actually see the house sliding back and forth. I knew it was a big one. The last big one we felt was about a 5.0 a couple of summers ago. When the shaking stopped N called out that the pool overflowed. The swaying was so great that the pool water has washed out of the pool… The chandelier in the dining room was still swinging back and forth. No other damage that we can tell but it was a bit scary. At first the news stated it was a 6.9 but now it is ranked as a 7.2.

When we lived in Buffalo you would usually have plenty of notice if a storm was going to hit. You could go to the store and stock up on bread and milk. Sometimes companies would let you out early to get home safely. Yes, occasionally there were a few storms like the Blizzard of ’77 or ’85 or ’99 that people got stuck at school or at work. You do not have that luxury with earthquakes. They are unsettling… not enough that I want to move back to the Snowbelt but unsettling nonetheless.

When L and I were standing outside later in the day this little guy stopped by… I got so excited that he was just sitting there… as usual when these guys stop by, I do not have my camera in hand. I ran in to get it, came back…. and got the shot. I was so excited! 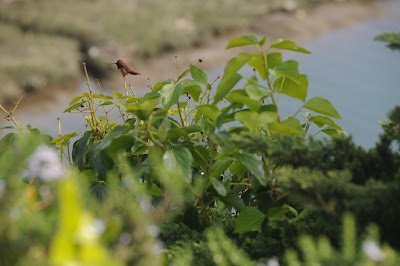 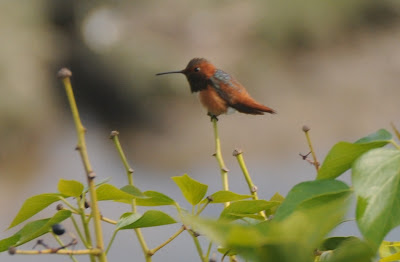 The excitement did not end there. Earlier in the day we saw this elderly lady driving an Excalibur. N commented on all of the horns on the car.

L went out about 7:30 for his usual Starbucks run… he came back with this strange look on his face. “You know that Excalibur that we saw this morning?”… “Well it just ran into to me!” It was dark and the elderly woman did not make the turn onto our street. L was at a stop sign with people in front of him so he had nowhere to go.

Let’s just say there is a lot of damage. The whole driver’s side and rear wheel… It even cut right through the metal… it reminded me of the scene in Grease… during the race when the guy cuts up the side of Kenickie’s car. Ouch. 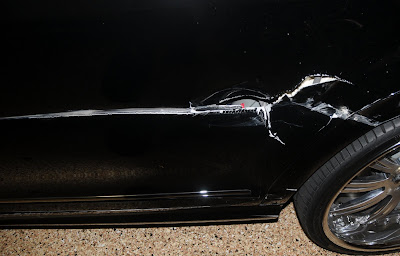 So that was our Sunday… too much excitement but no one was hurt and that is truly what is the most important.