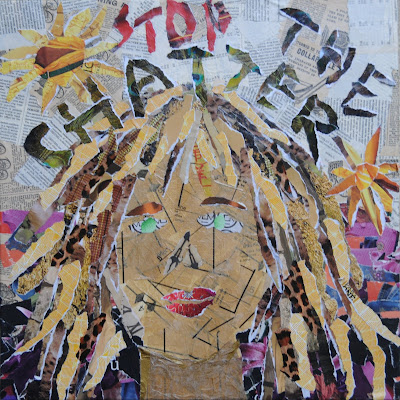 This fear that we ought to have all kinds of credentials to truly earn our success raises havoc with our faith in our work.

I have the credentials as an interior designer, but when I think about being a mixed media artist or a painter then the havoc awakes. I always think I have to “take a class” before I can do something. Taking classes is good, learning new ideas and meeting new people, but many times when I take the class I feel like I could have taught the class. I have that self-doubt until I see the “competition”.
My life has been that way for a very long time. So many times people stand up and say they are the "best" at something, but many times they are not – but they know how to market themselves.

Barbara spoke out very strongly about the power of misguided teachers who become internalized as gremlins: “ A good teacher is the holiest of God’s creatures. I don’t think that there’s another role in our culture that deserves the rank of holy except a great teacher who excites you. And the bad teachers should be made to march in chains. I don’t care if you’re just teaching someone to play the guitar or how to fix car. When people love to learn and they feel it’s safe to try things with someone to help them along, that’s great. Anybody who stops that has murder on their souls; they’ve got blood on their hands.”

I was fortunate to have some great art teachers up until college that is. I think design school is supposed to be tough. They are preparing you for the real world. I know criticism… I was the youngest of 5 and both parents were very critical. I can also be critical of myself and others. I have spent many years trying to “relax”. Misguided teachers really get to me. There are so many bad teachers out there… so many who should not be teaching anymore. Laurie Zagon, a friend and founder of Art & Creativity for Healing who has worked with countless adults and children has found that there are 2 main reasons that people think they are not creative or cannot paint. They either had a really bad art teacher or someone else in the family held the “artistic” role.

Many times I have to give myself the same advice that I do when I am working with kids and not be so critical of my work. I just need to learn to play with the materials, relax and let it be…

Mastering the fear and proceeding in spite of it is the best revenge against society’s thrust to keep women voiceless.

For me, proceeding in spite is probably the most important phrase. During my first year in design school, I produced many really poor ideas and projects. I stood up during the critique and took the criticism from my six instructors. But there was nothing that was going to stop me from my dream. Near the end of my first year we had to create a metamorphosis in six phases. You had to work with either 6” spheres or cube shapes and they had to change in 6 stages. I started with 6 “chicken wire” 6” x 6” cubes soldered together. The first stage had a small ball made out of steel wool inside. I likened my project to cancer and the steel wool eventually overtook the cube. I ended with a 6” steel wool ball with bits of the chicken wire sticking out.

I was happy with the project. We had to set up our pieces simultaneously in the studio. When the instructors got to mine they could not match up the project to the student. A few times they asked whose project it was and I raised my hand. “No really” was one of the responses, “this is yours?” was another. The teachers loved the project – I think it was my first A that year. It was even selected to be in the year-end show. In some ways I guess I have to thank all those that criticized me prior in my life, if I had not been used to such harsh criticism I am not sure I would have been able to make it through the program. PROCEED IN SPITE!

We can listen to everything we hear, but then it’s important to sort it out realistically, learn what we need to, and discard the rest. Not everyone is going to understand what we’re up to. A critical skill for many creative women is discernment – knowing whose advice is from the heart and really meant to be helpful, and avoiding folks who pull you away from your intentions and may be trying to undermine your achievement.

This is so important. I love to ask people their opinions, to learn from them. But then I have to sift through the “you should” comments and decide what I want to do. Sometimes there is helpful information and critique and other times you can hear THEIR agenda in their voices. Sometimes we need to stop all of the chatter in our heads and keep creating… just keep creating….
at 4:54 PM
Email ThisBlogThis!Share to TwitterShare to FacebookShare to Pinterest
Labels: 12 secrets, Art and Creativity for Healing, creativity

I totally agree with you.

I am a teacher and I know for a fact that not only should certain teachers no longer teach, they should never have been allowed to teach. This is why our profession has become ridiculed and undervalued.

But don't let me start on this subject, I can write on it for hours.

I think a lot of people who critique have no idea what the purpose or format of the critique is. It's primary function is to give positive feedback and constructive suggestion. Yet, it is used by people who think they are better than anyone else and qualified to stand from on high and judge others' work. Pshaw!

You rock it, and keep rocking it, and to hell with the naysayers! :)

Wow! The 'take a class' point is well taken here! Isn't life a veritable classroom? We are all qualified to be creative and here's to us!
--Suz

Oh I so needed this post!
I was asked to teach a class. Deep down I have wanted to do it and yet I have been caught up worrying if I have the credentials. My gremlin keeps saying, "You're not a REAL teacher!" Thanks for a nudge into a more positive direction.

Well it seems to be about being faithful. You know, full of faith... in ourselves and in our work. Full of faith even when the work seems too little, incomplete, better left to others.