From my Closet... to my Lens


Today is Election Day and this is one blog that you will not find a political post! That was one request, statement, whatever you want to call it that I told my husband long ago. I will not be a political wife so if you ever want to run for anything count me out. That being said my son is home sick today so I get to catch up on some things. This blog is one of them…

Saturday night, L and I went to a fundraising event “An Evening for Autism 2008”. It was at the home, estate, mansion of a friend and former client of my husband’s. This man’s son was diagnosed with Autism. They were expecting 750 people, I am not sure if that many actually attended, but imagine the size of the estate that when that many people were in the backyard (over the covered tennis court to be exact) with food venues, a stage etc. and you could still move around comfortably. It is another world that I only have glimpses of when invited to events like this.
The events’ main sponsor was Tommy Bahama, but many other restaurants participated. 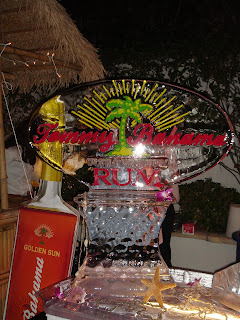 The food was great – tastes for everyone. The Yard House, Scott’s Seafood Grill, Newport Rib Company (the best ribs I have had out in CA), Beach Pitt BBQ and Maggiano’s Little Italy. Cheesecake from the Cheesecake Factory, delicious chocolates and a chocolate fountain by Valentino – with a name like that how could they not be good, Tiramisu – okay can you tell that I eat dessert first!!!

There were a few celebrities – more were supposed to show – but you know their hectic schedules!!!! There was a rumor that Jim Carrey and Jenny McCarthy were supposed to show as her son also has Autism. “Jo” from the Real Housewives of Orange County walked but me quickly and then I could not find her again.

Then there was this guy….. 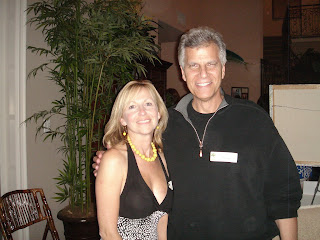 He adorned by closet door so many years ago, a full length poster of him and his accomplishments. Thirty-two years later I met him, stood next to him and had my photo taken with him. Now that I am blogging I am always looking for “material”.

Mark Spitz… If it were not for the Olympics just happening I am not sure that I would know what he looked like. To me he does not resemble his image from 32 years ago. Still handsome nonetheless. He was a friend of the host also and was there to donate a private 1 ½ hour swim lesson. His lesson went for $1000.00.

I met a man who runs a surf school but also teaches physically challenged adults and kids to surf. They use adaptive surf boards so they can stay afloat since many are quadriplegic. I also spoke with a teacher whose students are special needs. There was a company who donates 50% of their profits to various causes all year long, not just for awareness month. Hope Wines. I love to meet people and find out “their story”, how they ended up where they are, what their cause is, what their interests are.

It was a fun event – they had 3 bands: Steel Drums, A Beatles Tribute band and the Oreo Divas (they were so good), live and silent auctions – all for a good cause. Now if I only saved that poster – an Ebay listing for sure…