I participated in a Bereavement workshop as part of my ongoing training in facilitating therapeutic fine art workshops. Laurie Zagon, founder of Art & Creativity for Healing feels that unless you have experienced the workshop, it is difficult to actually facilitate it for others.
We were to create a collage in a color that reminds us of the loved one using various shades of the color. We were also able to use images in this collage that reminded us of good times with the person. I have taken enough of these workshops to know even if you go into it thinking that you know what you are going to process, it does not always turn out that way. It is more beneficial to just let it go and see what comes up for you at that moment. I have lost many people - though none recently so I did not have anyone particular in mind. When I looked at the magazine that was placed in front of me, I knew who I was supposed to be remembering. My roommate from Parsons School of Design in New York City - Heather..... 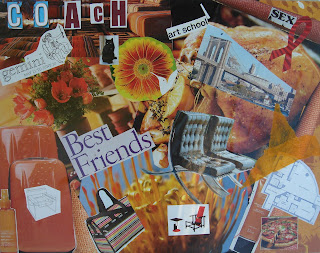 I arrived from Buffalo, NY and she arrived from Overland Park, Kansas. The school put us together as roommates. As we unpacked our bags we had many of the same clothes from the Limited. We were both Gemini's, born 12 days apart. We were both in the Interior Design program. We lived together in the dorm the first year and then got an apartment in Astoria, Queens after that. We had mice - so we got a cat, he was grey and white and we named him Buckwheat, he was also great at munching on the roaches. Going for a "slice" of pizza was an almost everyday occurrence as well as late night runs to the newsstand for candy. When money was sent from home we would treat ourselves to the Magic Pan for crepes - we usually would split the fresh strawberry crepe for dessert. We would love to go to Balducci's - since it was near school for chicken with pesto or strawberry tarts. We were together for 3 years almost every day as we were in most of the same classes. Even when we would go home for breaks or summer and return it was like we had never left each other. We would laugh so hard at the silliest jokes. I really do not even remembering having an argument. Her Mom used to send her Coach Bags all of the time. I was more the Sportsac type.

After graduation I moved back to Upstate NY and got married and she stayed in NYC. She moved in with her boyfriend of many years, John. We stayed in touch and we would visit in NY or then would come up and visit us. They got married in 1986 on a yacht that cruised around Manhattan. On a visit a year or so later we saw Heather but John did not want to come and see us. We kept asking why and she just kept making strange excuses. She met us for dinner and dropped the bomb. "John and I have AIDS". I sat stunned. John was a sex addict. Although we all knew he had some peculiarities - I do not think anyone knew exactly to what extent. They were not sure exactly who he got it from and they think he passed it to Heather around the time of their wedding. John ignored his symptoms, so by the time they figured out what was wrong (it was the mid 80's) he had full blown AIDS. Heather was still HIV at that time. A few weeks later we got the call that he died at the age of 27.

Heather lived and worked right up to her death at age 31. My husband had thrown a surprise 30Th birthday party for me and Heather flew in , I am so thankful that she did because I think I only saw her once after that. It has been 15 1/2 years since she died and you would think that I had grieved her. But when I started this collage, tears ran down my face. It took me back to when I was so young and had such big dreams and goals. When it was my turn to share my collage, I could barely speak. They were both taken way too young. Thankfully now people with HIV and AIDS are living much longer. So here is my tribute to one of my best friends ever. I still miss her, but I know when we meet again we will "crack up" just like old times.